Last March 28, 2015, several lawyers flocked to Powersmash Badminton Court in Makati City for the annual badminton competition organized by the Maritime Law Association of the Philippines (Marlaw). This was a whole day event. The lawyers, as well as their non-legal staff, represented their respective firms and vied for the title of Badminton Champion.

MARLAW is a national organization of lawyers representing the maritime sector from shipbuilders, insurance representatives, manning agencies, seafarer lawyers, and custom brokers. It is an affiliate of the Comite Maritime International (CMI), an international organization of maritime practitioners aimed at the unification of maritime law all over the world.  Most, if not all of the country’s leading maritime lawyers are members of the organization. Among them are Attys. Arturo and Ruben Del Rosario of Del Rosario and Del Rosario Law Office; Atty. Ignacio Sapalo of Sapalo Velez and Bundang; Past Integrated Bar of the Philippines (“IBP”) President Atty. Lenny Villareal; Marina Director Atty. Lamberto Pia; and DFA Undersecretary Atty. Gilbert Asuque, among others.

Since this competition was organized by Marlaw, most of the participants came from law firms with maritime law practice, maritime agencies and organizations, including, Sapalo Velez and Bundang, Esguerra and Blanco, VERA Law and Magsaysay Maritime.

The event could not have pushed thru without the help of the following sponsors: 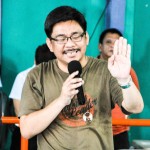 The Project Chairman for this competition was Atty. Dennis R. Gorecho from Sapalo Velez Bundang and Bulilan Law Office. At the start of the event, he enumerated the participating firms, announced the rules and introduced the sponsors. Then, Board of Trustee Member and MARLAW Past President, Atty. Francis Egenias, led an invocation. Afterwards, Marlaw President, Atty. Joy Lasam-Ybanez made her opening remarks. Thereafter, MARLAW Executive Vice President, Atty. Keith Richard M. Pioquinto officially opened the event by making the first ceremonial toss.

Then, it was game time.

A heated and passionate competition ensued. Lawyers and non-legal personnel battled it out. At the end of the day, the champions emerged: